Looking for a performance of  Messiah  this Christmas season?
You've come to the right place.

George Frideric Handel's  Messiah transcends faith and beliefs. It is a pillar in our musical lexicon that is one of the most widely performed works of music history. Everyone should experience the musical joy and power of Handel's Messiah.

George Frideric Handel’s Messiah  is an oratorio in English, composed in 1741 and first performed in Dublin in April 1742. Its libretto is drawn from the King James Bible and from the Psalms from the Book of Common Prayer. Messiah’s Dublin premiere was followed by a premiere in London, and by the early 1800s, performance of the Messiah  was already a Christmas tradition—though the work was originally intended as an Easter performance. Today it is one of the most well-known, beloved, and frequently performed choral works from the Western tradition.

Artistic Director Dr. Kenney Potter is excited to bring this beloved master work to life in a style that is historically informed. “It will be performed using a style and timbres that are more faithful to what Handel intended,” he explained. “Working with the North Carolina Baroque Orchestra and singing with an 18th century style, in contrast to its being performed in a heavier 19th or 20th century style.”

Listeners can expect to hear a true Baroque style, which is light and transparent, as Baroque music is based on dance. Listeners will also notice choral singing with less vibrato and more stylistic ornamentation, such as the trills that are a wonderful hallmark of Baroque era music.

Potter also carefully selected soloists who are Baroque specialists, further heightening the historically-informed experience. Awet Andemicael, often hailed for her “quick, clean, silvery” coloratura will join the performances as soprano soloist. Baritone Jesse Blumberg also will solo, bringing a background in Renaissance and Baroque styles. Countertenor Timothy Parsons is well known as a soloist and ensemble singer in New York City and is currently a member of the Trinity Wall Street Choir. David Venderwal will be featured as tenor soloist, an artist in high demand for his clarion lyric vocal qualities.

General Admission: $35
Students: $15 at the door with valid ID

The Gastonia performance of Messiah  has been generously underwritten to allow for a reduction in individual ticket prices.

In order to ensure that our patrons and our performers remain as safe as possible, we have made the difficult decision to move the performance in Gastonia scheduled for Sunday, December 9 at 4:00 p.m. at First Baptist Church of Gastonia toSaturday, December 8 at 3:00 p.m. at First United Methodist Church of Gastonia. Due to time constraints, this performance will be an abridged version of Messiah featuring Part I and ending with the Hallelujah Chorus.

General Admission $25
Students: $15 at the door with valid ID 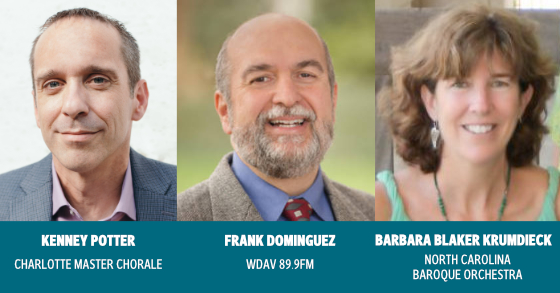